Russia proposed a new ceasefire in preparation for opening corridors to evacuate civilians in five cities, but Ukraine has not yet agreed.

“The cease-fire came into effect at 10:00 a.m on March 8, and Russia is ready to open humanitarian corridors from Kiev and neighboring regions,” the Russian Coordination Center for Humanitarian Response in Ukraine said in a statement dad today.

Those evacuating through this humanitarian corridor will be transferred to the city of Gomel in Belarus before being taken to Russia.

Several other humanitarian corridors were also opened in the cities of Chernihiv, Sumy, Kharkov and Mariupol to evacuate civilians from the conflict zone. People from Chernihiv will move through Belarusian territory, while evacuees in Sumy will follow two routes to Poltava to reach Russian territory.

The humanitarian corridor in Kharkov, a city under siege and shelling by Russia, will lead to Russian territory or other Ukrainian cities including Lviv, Uzhgorod, Ivano-Frankivsk. People stranded in Mariupol, southeastern Ukraine, will be moved to Russia or to the nearby city of Zaporizhie.

However, the Ukrainian side is said to have not yet agreed to this ceasefire proposal. 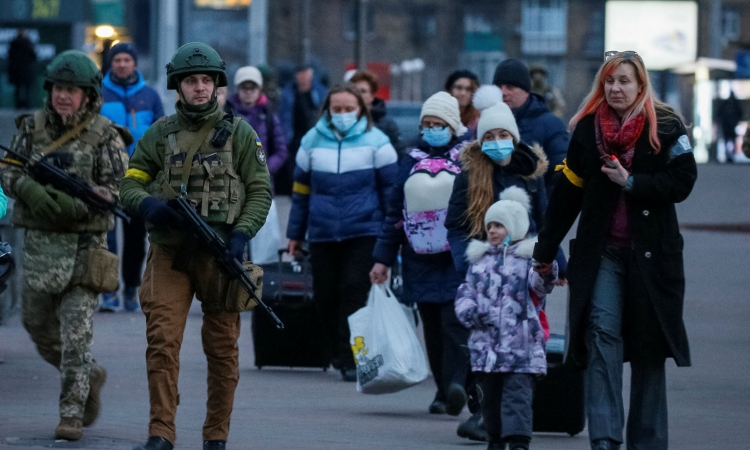 The Russian Defense Ministry yesterday announced the opening of humanitarian corridors in Kiev, Mariupol, Kharkov and Sumy for civilians to go to Belarus or Russia. The Russian military said the decision to cease fire and establish an evacuation route was made at the personal request of French President Emmanuel Macron.

However, Ukraine’s Deputy Prime Minister Iryna Vereshchuk later said that this was not an acceptable option, stressing that ordinary Ukrainians “don’t go to Belarus and then take a plane to Russia”. She called on Russia to agree to a ceasefire to allow Ukrainians to evacuate towards the city of Lviv in western Ukraine.

The war between Russia and Ukraine has entered its 13th day. The General Staff of the Armed Forces of Ukraine yesterday released a combat report, saying that Russian forces are continuing their offensive campaign, focusing on encircling the capital. capital Kiev and the cities of Kharkov, Chernihiv, Sumy and Mykolaiv. However, the Ukrainian military believes that the Russian side has not achieved the goal of the operation.

Ukraine’s military believes that Russia is concentrating resources, creating a pincer posture to prepare for an attack on Kiev after many days of slow progress. This force claims to have regained control of the city of Chuhuiv in the northeast of the country, as well as the strategic Mykolaiv airport in the south, but the information has not been verified.

During the third round of negotiations between Russia and Ukraine on the evening of March 7, the two sides agreed to a number of changes in logistics, making the process of supporting people more effective, but did not specify.

The three-hour talks were confirmed to have fallen short of expectations and Moscow and Kiev will continue their dialogue in the hope of making concrete progress. Neither side has set a time or place for the fourth round of talks, but the Chairman of the Foreign Affairs Committee of the Russian lower house Leonid Slutsky said the discussion will be held in Belarus in the near future.

The Office of the United Nations High Commissioner for Human Rights (OHCHR) said at least 406 civilians have been killed and 801 injured since fighting began on February 24, adding that the actual number could be higher. The number of people who had to leave Ukraine to avoid hostilities has reached 1.7 million.